The Case for Keto in Depressive Disorders

A ketogenic diet is a low-carbohydrate way of eating that has been gaining public attention due to its dramatic results on people with obesity or diabetes. While many people are introduced to the diet as a means to improve their physical/metabolic health, a large number of anecdotal reports suggest that it also has the potential to help improve mental health; i.e. decreasing anxiety and depressive symptoms. As a complement to my (empirical) survey-based research presented on the poster below that provides observational evidence, in this article I will make a (theoretical) case for how and why a ketogenic diet can improve depressive symptoms.

Recent studies have found an association between diabetes and depression. While results vary widely due to different methodologies and criteria among these studies, it is estimated that diabetes occurs at a rate that is two to three times higher in people with diabetes mellitus . Another study showed a 79% relapse rate for diabetics with depression , indicating that diabetes-associated depressions may be more persistent and recurrent. The severity of diabetes may correspond to an increased risk for depression, as evidenced by one study in which diabetics on insulin had higher rates of depression than those not on insulin . However, this study also suggests that taking insulin exogenously, which is often the medical treatment for diabetes, does not ameliorate the depressive effects. So what does this all mean? Is diabetes a physical ailment with mental side effects that only worsen as the disease progresses? Or are we able to do use a treatment other than insulin?

This is where the keto diet comes in. The keto diet has recently gained popularity as a weight-loss tool in the general population, and as an effective treatment tool for physicians treating type 2 diabetes. One company called Virta Health, a medical corporation aiming to treat diabetes with a nutritional approach, has published a number of papers on their outcomes, namely reduction of body mass, reduction of Hemoglobin A1C (a blood marker indicative of blood sugar), and with 56.8% of participants reducing or eliminating diabetes medications, in only ten weeks’ time . Another outcome published by Virta showed improvement in self-reported sleep quality , indicating a possible link to mental health benefits as a result of the diet.

You may be wondering why the ketogenic diet helps depressive symptoms in diabetes. While mechanisms of action are often the most difficult to parse out in medical science, there are clearly some overlapping biological factors in the disease processes of diabetes and depression. Disrupted sleep/circadian rhythms, increased inflammation, and dysfunction of the hypothalamic-pituitary-adrenal axis (a stress response characterized by increased release of the stress hormone cortisol) are some of the overlapping biological factors characterized by one review paper.

With the theory-based evidence summarized above and my observation-based poster below, there are several lines of evidence supporting the idea that a ketogenic diet could help people with depressive disorders (and especially if they already happen to have metabolic difficulties). While randomized and controlled trials, the gold standard in medical evidence, are yet to be performed for most applications of ketogenic diets, I won’t be waiting to share this information with my patients or the general population. If you have suffered with diabetes, depression, sleep problems, or mealtime-related difficulties with cognition, try the ketogenic diet. It may change your life. 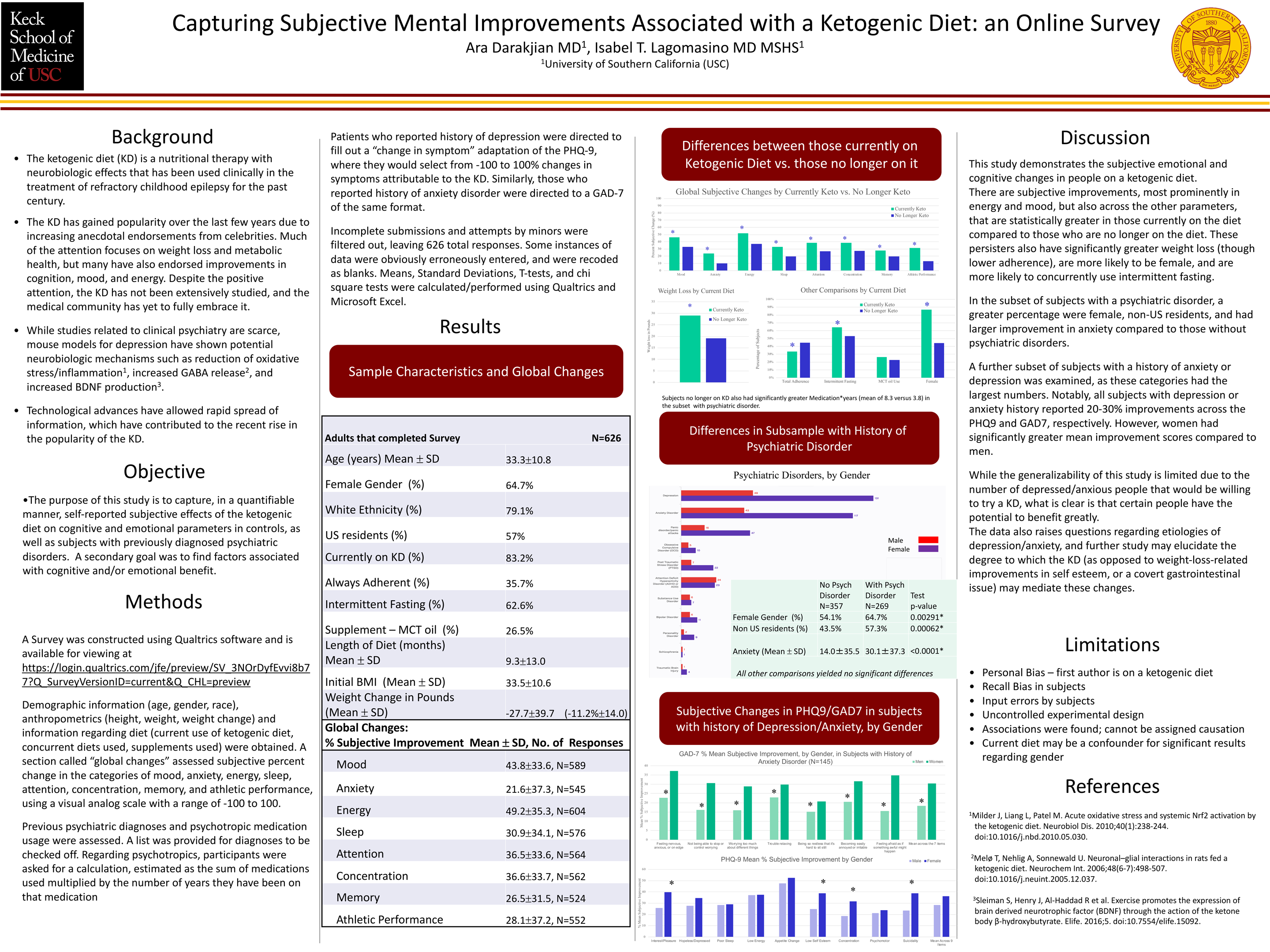 If you are interested in trying a ketogenic diet for your psychiatric problem, please contact Dr. Darakjian at ara@darakjianpsych.com to set up a consultation regarding treatment with Ketogenic Nutritional Therapy.